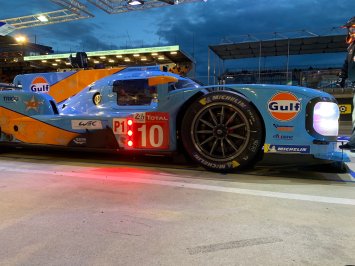 Leading automotive aftermarket PR and marketing company, Chicane, is delighted to have become part of the DragonSpeed LMP1 challenge at this year’s 24 Hours of Le Mans, as the team searches for outright race honours at the 87th running of the world’s greatest endurance race.

The #10 DragonSpeed Gibson-engined BR Engineering BR1 is resplendent in the iconic blue and orange livery of Gulf Oil, marking the 50th anniversary of the closest ever finish of a Le Mans race, a race won back in the day by the legendary Gulf Ford GT40s.

“We are proud to be part of this year’s Le Mans,” enthused Chicane’s Gary Barak. “We have a history of motorsport involvement amongst our Chicane team that stretches back many decades. Motorsport is the blood in the veins of the automotive industry and, if you look at the cars participating in this year’s race, it reads like a who’s who of suppliers to the industry – and we are very excited to add our name to this list once again.

“As many are aware, it is another anniversary year for Gulf – one of the three outright victories the brand has taken at Le Mans. It is also the 50th anniversary for TRICO, whose wiper blades helped the Gulf team sweep to glory in 1969, and we love the fact that 50 years on, the TRICO name is back on a top-flight contender, along with other leading automotive aftermarket brands, such as FAI.

“The passion is incredible, and it is something that we share with all of our partners and the team itself.”

The LMP1 category at this year’s Le Mans is likely to be a fiercely-contested affair and, against the might of Toyota’s star-studded factory team and other established names, like Rebellion and SMP Racing, the #10 DragonSpeed car is going to have a mighty task ahead of it. DragonSpeed however, has a great sportscar racing pedigree, and this season it has become the first team to have secured LMP2 class wins in the WEC, ELMS and America’s IMSA series.

Ben Hanley, who raced for DragonSpeed in the team’s debut at the famous Indianapolis 500 back in May, is part of the Le Mans 2019 line-up, together with Dutchman, Renger van der Zande, and Swedish driver, Henrik Hedman.

The DragonSpeed car will start the 24 Hours of Le Mans 2019 in seventh-position, with the race starting at 15.00 CET on Saturday 15th June.